More than three years have passed since the beginning of events on the “Maidan,” which finally revealed 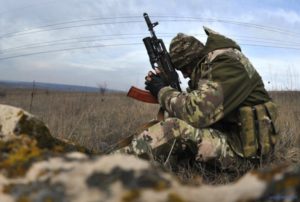 Russian Federation (RF) intentions and attitude towards Ukraine as a sovereign state. In order to implement long-established plans, RF – our “guarantor” of sovereignty and inviolability under the Budapest Memorandum – took advantage of the situation prevailed at that moment in Ukraine and occupied Crimea, launched an aggressive war in Donbas by creating self-proclaimed Donetsk and Luhansk People’s Republics (“DPR”, “LPR”), and created and armed illegal military formations directing them against the Ukrainian state.

As the result, this planned and implemented armed conflict has caused not only significant human and material losses, but also systematic and massive human rights violations. According to the Office of the United Nations High Commissioner for Human Rights, Ukraine has had more than 10,000 people killed. Armed conflict in Ukraine has caused the largest migration of people in Europe since the World War II, when people fled from political persecution and war. The main motivation of our work presented here is to punish the of criminals that made this happen.

We have gathered convincing examples of international humanitarian law violations, committed during the armed conflict in the East of Ukraine, which are presented in this report. This includes: brutal torture; executions; deaths as a result of torture; other cruel, inhuman, or degrading treatment; and murders after kidnapping or taking hostages. We conducted our own investigations and analyzed the committed crimes in accordance with the current legislation of Ukraine. Though the conflict in the East can be qualified as international (there is significant evidence for the intervention of the Russian military forces and security services), we decided to demonstrate the lack of will and desire of the Ukrainian authorities and state authorities and services to conduct investigations and review crimes in the context of Ukraine’s criminal law.

We are also deeply convinced that in order to achieve peace and justice, the perpetrators must be brought to an international tribunal, since most of the crimes described in this report can be qualified under Article 7, “Crimes Against Humanity,” and Article 8, “War Crimes,” of the Rome Statute of the International Criminal Court.